<!--ImageGroup--!> <!--Freetext--!>Rogues are the riskiest, sneakiest and most clever of all the classes since they are both thieves and mystery men but their real design is treasure hunting. They know they will never find wealth if they take up the spit worthy jobs in the city, sometimes they will sing for their dinner or spin tales to pay for a room. But the real coin is in going to ruins or caves long since abandoned because men of the past often leave their luxuries behind like that. In a fencing competition a rogue does well and might cheat if your not watchful, they sometimes take up a life of piracy for the high seas and the treasures they can get from such and adventure. Their covert skills often gain the notice of a local lord, king or an arch priest and in some sleazy cases a guild of murderers for hire. When that notice comes the wealth is guaranteed, only as street rats do they become burglars which isn't a life at all, just a skill they have for survival in the civil realm. You'll rarely find them in the wilderness and just as rarely find them serving a church since they are too independent to live that life anyways, they still outwit even the wisest people with their tools and can stop enemies in full charge with their traps.<!--EndFreetext--!> 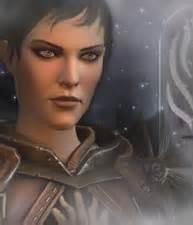 <!--Freetext--!>In fantasy a justicar serves at the side of a king or ruler of a church mostly to jump in and aid them should the wicked get any ideas. If their ruler is threatened they remain at their side should the killer reach them surpassing their knights. They are always the right hand of the ruler they serve as the knights are the left hand serving them whatever they command.<!--EndFreetext--!> 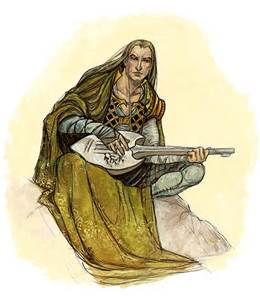 <!--Freetext--!>The most honorable rogue you will meet since they are the tale tellers, the song makers and the diversionists for a situation that calls for it. They might get involved in a nobles game of houses but only for a short while before they find themselves in espionage. They get into as much trouble as they do a situation of entertaining their patrons for coin, they are also known to be incredibly romantic.<!--EndFreetext--!> 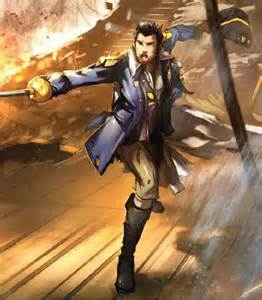 <!--Freetext--!>The most stand alone rogue yet they are as romantic as they are a scoundrel who will back-stab you one second and protect you the next. Duelists get the women and the luxury as they hunt for it or take it from a ruined fortress that has yet to be perused by looters. They become pirates or simply sailors enjoying high seas adventures that may lead to wealth or peril. If you think you have them on the ropes... Think again, they are very good at trickery as any rogue is expected to be.<!--EndFreetext--!> 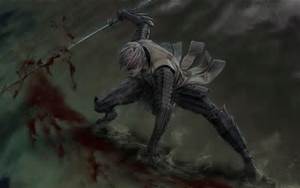 <!--Freetext--!>The absolutely most villainous rogues of all since they enjoy killing as much as they do taking contract hits on people or entire families. They often will take coin to assist in a coup attempt and might succeed if the king's trusty army isn't there to help him. They are as employed by kings as they are repulsed by clerics who see them as wicked men doing the job of evil people.<!--EndFreetext--!>


In A Rogues Pack 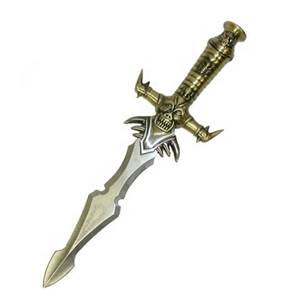 <!--Freetext--!>A rogues only weapons besides a shortbow which they often use to make their sneaking easier or to create a diversion. The daggers make for quick and bloodless kills, they are also good for tossing at an enemy or a foe who dares to kill their friend.<!--EndFreetext--!> 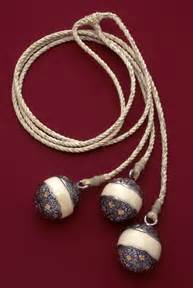 <!--Freetext--!>When caught and being pursued, a rogue has a range of tools to escape with yet the bolas take longer to remove whereas they might charge through smoke or walk around the spiked balls. Disarming an opponent with a whip is also useful but only effective for a time until they recover and throwing a pebble at a guard to knock him out only lasts for an hour at most. The bolas get tangled and take longer to dismantle than any other trick.<!--EndFreetext--!> 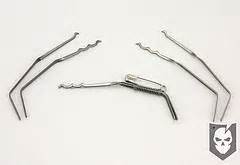 <!--Freetext--!>Lockpicks are essential for any rogue to loot chests and other locked places they will to get to, treasure isn't free without the right tools.<!--EndFreetext--!>

<!--Freetext--!>Rogues are trap masters, they set them, they maneuver around them and they dismantle them all clever tactics in dangerous ruins and forts. Traps are designed to keep them from getting to their goal even as they can lock pick and cleverly sneak past foes.<!--EndFreetext--!> 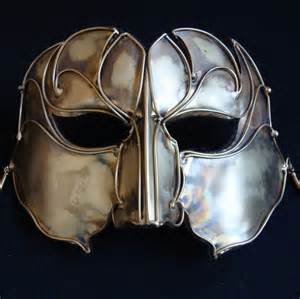 <!--Freetext--!>A rogue uses a mask to conceal their identity so no one can identify them in order to find the culprit behind the theft, it even helps if they wish to keep friends and family from danger.<!--EndFreetext--!> 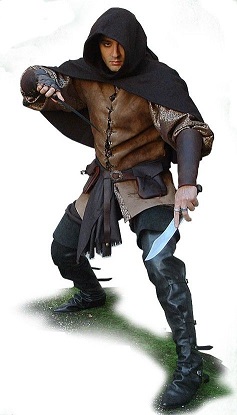 <!--Freetext--!>Rogues normally are seen in street clothes or commonly referred 'peasants clothes' meaning they didn't grow up in wealth, these people however become the types who normally change their fortune by delving into ruins, long lost caves or any place that local peasants rumor is overrun by vampires, ghosts, nasty critters, a band of thieves or a barbarian horde but the hopeless boy hardly cares, what has he to lose? He learns in the streets the art of theft to some degree mostly to survive. His clothing changes over time as he becomes accustomed to sneaking about, mere hit and run tactics, lockpicking and subterfuge to the point he could learn many secrets including magical locks, that is he obtains a nobleman's vest, a wrap-over shirt, leather pants or poofy shorts (all of which have pockets either existing or he sews them on), tall leather boots somethings with belted straps (good for hiding daggers), rings and other jewelry (a rogue loves bling) all the while they still live somewhat like a pauper being they prefer their minimal rogue lifestyle, some rarely go all the way with the noble lifestyle (if they dreamed of living like that, that is) at that point much of the time they'd start a sort of guild maybe of thieves or of rogues which mostly is for training and helping them to get where they are.<!--EndFreetext--!>